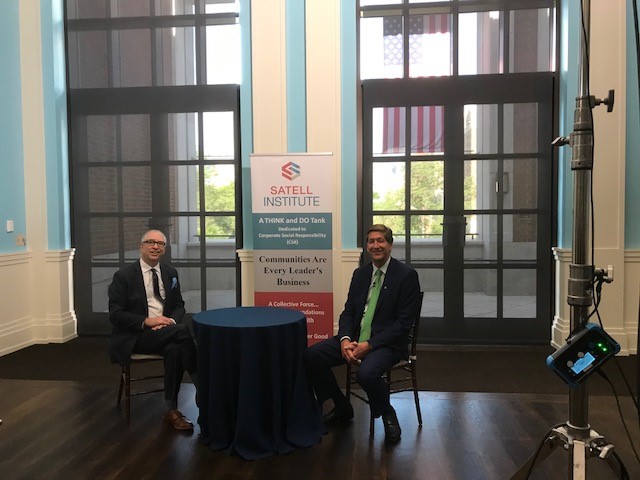 On June 24th the Satell Institute held its fifth semi-annual CEO Conference, by invitation only, for its CEO business and foundation Members who include many of the most prominent leaders in the region, a diverse group of Nonprofit Affiliate CEOs financially supported by our Members, and invited CEO guests who may choose to become future members.

This was the first livestream CEO Conference produced by the Satell Institute. Focused on the challenges of recovery, the Conference has been consistently called a significant success by the attendees for its content, its impact, its use of modern technology and the opportunity for meaningful idea exchange.

Attendees were challenged and inspired by the high-energy presentation of a recognized prominent national leader and innovator in health care, Dr. Steve Klasko, CEO of Jefferson HealthCare & Thomas Jefferson University. They were also inspired by thoughtful questions posed by moderator Craig Snyder, CEO of the World Affairs Council during a “fireside chat” with Keynote Speaker Bruce Van Saun, Chairman of Citizens Bank, a major financial leader named “Banker of the Year” in 2019 by American Banker. Bruce offered insightful answers on the financial ramifications of the recovery, what other companies are doing to move ahead, and Citizen’s commitment to Corporate Social Responsibility.

During these presentations, one of our Guest CEOs sent in his New Member form, naming the two nonprofit organizations his company will support, making these Nonprofit Affiliates. What an outstanding outcome! More coming.

Two other parts of the Conference also earned great reviews. First, a Business Leader Panel responded to questions raised by the over 150 attendees. The panel included Marc Brownstein, CEO of Brownstein Group, Henri Moore, VP and Head of Global Responsibility for Corteva and Nick Bertram, CEO of Giant as well as Steve and Bruce. They hit a major home run with their candid observations on communicating, planning and implementing recovery from diverse perspectives. Attendees cited numerous takeaways from the questions presented to the panel by Tony Conti, Executive Vice Chair of the Institute and former Managing Director of PWC (ret).

The CEO breakout sessions provided interactive time for idea exchange. Many of these peer sharing groups found their takeaways of significant value as they face challenges of the future.

The Institute thanks its Members, guests, and especially the exceptional presenters! The next semi-annual Private CEO Conference is scheduled for October 13th, 2020, featuring Keynote Presenter Peter L. Scher of JPMorgan Chase & Co, Head of Corporate Responsibility nationally for the firm. He also serves as the firm’s senior executive in the Mid-Atlantic region — one of the largest economic regions in the United States. Scher believes: Now more than ever, business must step up and collaborate with local, civic and government leaders to lend our expertise toward solutions that support our customers, communities and employees in need.

The Satell Institute is an unusually successful private convening group of altruistic CEOs in the region focused on Corporate Social Responsibility to make our communities where we live and work better for all. A requirement of membership is that each company support at least one nonprofit of their choice with four-year gifts of a minimum of $25,000 a year ($100,000 total). Many choose to voluntarily give such support to more than one nonprofit of their choice and at amounts substantially higher than the minimum.

The Satell Institute is very happy to welcome TD Bank and Market President Tom Shoemaker as a new Member. One of the country’s 10 largest banks, TD serves 9 million customers across the Northeast, Mid-Atlantic, Metro DC, the Carolinas and Florida. Its commitment to be “Unexpectedly Human” in its business practices extends to its work in the communities in which it lives and works. Their slogan: If something matters to humans, it matters to us is certainly apt in their partnership with The Mann Center for the Performing Arts. The Mann Center matters to so many in our region, and TD has formed a multi-year commitment to this nonprofit, enabling investments that will improve and enrich its visitor experience for years to come.

We also proudly welcome new Member Ed Frankel and the Leah & Ed Frankel Support Foundation. The Frankels have chosen to support two nonprofits. The first is Tikva Children’s Home, whose core mission is to care for the homeless, abandoned and abused Jewish children of Odessa and neighboring regions of the Former Soviet Union. Tikva provides a warm, compassionate home, essential social services and a quality education, while revitalizing the growing Jewish community of Odessa. The second is the Edna W. Runner Tutorial Center, dedicated to providing after school, spring break and summer camp services for children in grades K-8. They strive to help students develop interests, skills and knowledge in a variety of areas all within a safe, warm and nurturing environment.