What’s the state of Corporate Social Responsibility (CSR)? Its impact on the community and business? And where is it going?

Those questions were at the center of the Satell Institute’s Fall 2021 Private CEO Conference, held October 19th at the Kimmel Center in Philadelphia. Attended by a record crowd of more than 240 CEOs and other leaders, the conference gave Satell Institute Members and invited guests the opportunity to hear their peers offer perspectives on CSR and have in-depth conversations about the topic. “We’re really happy with where CSR is,” GIANT Company President Nick Bertram, who chaired the conference, told the crowd. “But we’re even more optimistic about where CSR is going in the future.”

The event began with a welcome from Satell Institute founder Ed Satell, who reiterated the organization’s core tenets and its community and business reasons for encouraging corporate support of nonprofits. “Nonprofits are the heroes of our society from a human-services point of view,” Satell said. “They volunteer to take on the tough human-services problems business and government don’t want to deal with. The second reason we support nonprofits is that they already have the knowledge and the infrastructure to handle these tough community issues.” 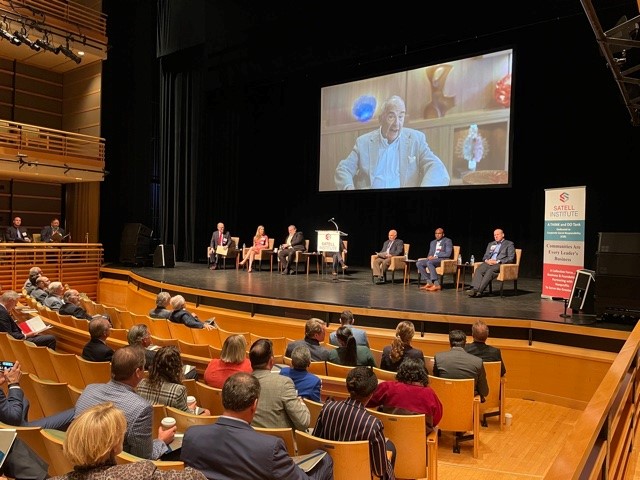 Satell said that since the organization’s founding, Members have provided support to 150 nonprofits totaling several tens of millions of dollars – and growing.

Here are five key takeaways from the presentations and conversations that followed.

Customers care about CSR.
Peter Frumkin, PhD, professor of social policy at the University of Pennsylvania and Research Director of the Satell Institute, presented a new study whose bottom line was clear: a company’s commitment to CSR matters significantly to consumers.

CSR is – and will continue to be – good for business.
Frumkin wasn’t the only one who made the connection between CSR and strong financial results. Mark Baiada, founder and chair of home healthcare company Bayada said that integrating the principles of CSR into his firm’s operations from the outset has been crucial to its success. The company, which was launched in Philadelphia in 1975, now has 25,000 employees in nine countries and $1.5 billion in annual revenue.

“We were always hedging the difference between having a successful, growing business serving our clients, and doing the right thing and being socially responsible and putting mission and values over the money,” Baiada said.

Baiada cited a number of company values – including a daily commitment to clients; having a strong social mission of helping people remain at home; showing respect for employees; and giving back to the community – as crucial to Bayada’s business growth. And he believes the company’s CSR-inspired mission helps it attract top talent (Bayada recently transformed itself into a nonprofit). “There are a lot of people out there who want to make a difference,” he said. “They want a job with a social purpose.”

Empowering employees is the next frontier for CSR. Two other presenters also spoke about the power of engaging employees. “We all sit in here as leaders, as CEOs, but at the end of the day our biggest success is going to be who we inspire within our company,” said Keith Leaphart, MD, chair of the Lenfest Foundation and founder of the startup Philanthropi, which gives individual employees tools to create their own personal foundations and make a bigger social impact.

Leaphart talked about the importance of CSR to younger generations, noting that Millennials and Gen Z are the two most active groups when it comes to philanthropy. “The workforce of the future wants to see us engaged,” he said. “The companies that provide the possibility and empower people to do good as well as work hard and effectively are actually going to win.”

Rodger Levenson, Chairman, President & CEO of WSFS Bank, explained how his bank offered loan deferments to its customers in the early days of the COVID-19 pandemic—with the strong encouragement of WSFS employees. “It was incredible for me as a CEO to watch,” he said. “Our people just did it because it was the right thing to do. It’s part of who we are. We stand for service.”

Levenson also discussed the bank’s policy of giving workers four paid hours per month to volunteer in their communities, which he said aligns with WSFS’s mission-inspired business model and amplifies its traditional corporate giving. “The impact you can have ON people serving the community will be 10 times greater than the financial support you give organizations.”

CSR can be crucial in a crisis.
Lauren Swartz, President & CEO of the nonprofit World Affairs Council, talked about how quickly the corporate community was able to rally in the early days of the pandemic to support nonprofits and the community at large. Swartz discussed the fast creation of the Satell Institute’s Youth Enrichment Series (YES) program, with nonprofit and education professionals working with corporate leaders to bring to life an idea first suggested by Ed Satell. The program offers online and in-person educational support to Philadelphia school students which helps make better citizens and better employees.

CSR and philanthropy can change the world.
Finally, the conference’s keynote speaker, Richard Vague—entrepreneur, author, and Pennsylvania’s current Secretary of Banking—pointed to the extraordinary medical research now being done in Philadelphia as an example of how CSR , philanthropy and business can make a massive impact.

Vague noted that there are more than 2000 MD-PhD researchers working in Philadelphia in the field of immunotherapy, which is already transforming how cancer is treated and has the potential to revolutionize the treatment of scores of other diseases. While that work currently has a budget of $1.2 billion, much of it coming from the federal government, “It was private, personal and corporate philanthropy that often carried the early steps of the research,” he said. “Most of it was unfundable by government, too radically experimental for those federal dollars. It was private and corporate philanthropy that stepped in and saved these efforts when they were about to disappear.”

Vague said such examples made him optimistic. “Because of you,” he told the CEOs and others in attendance, “there is reason to hope and celebrate the endless creativity of mankind and the equally endless possibilities for our future.”