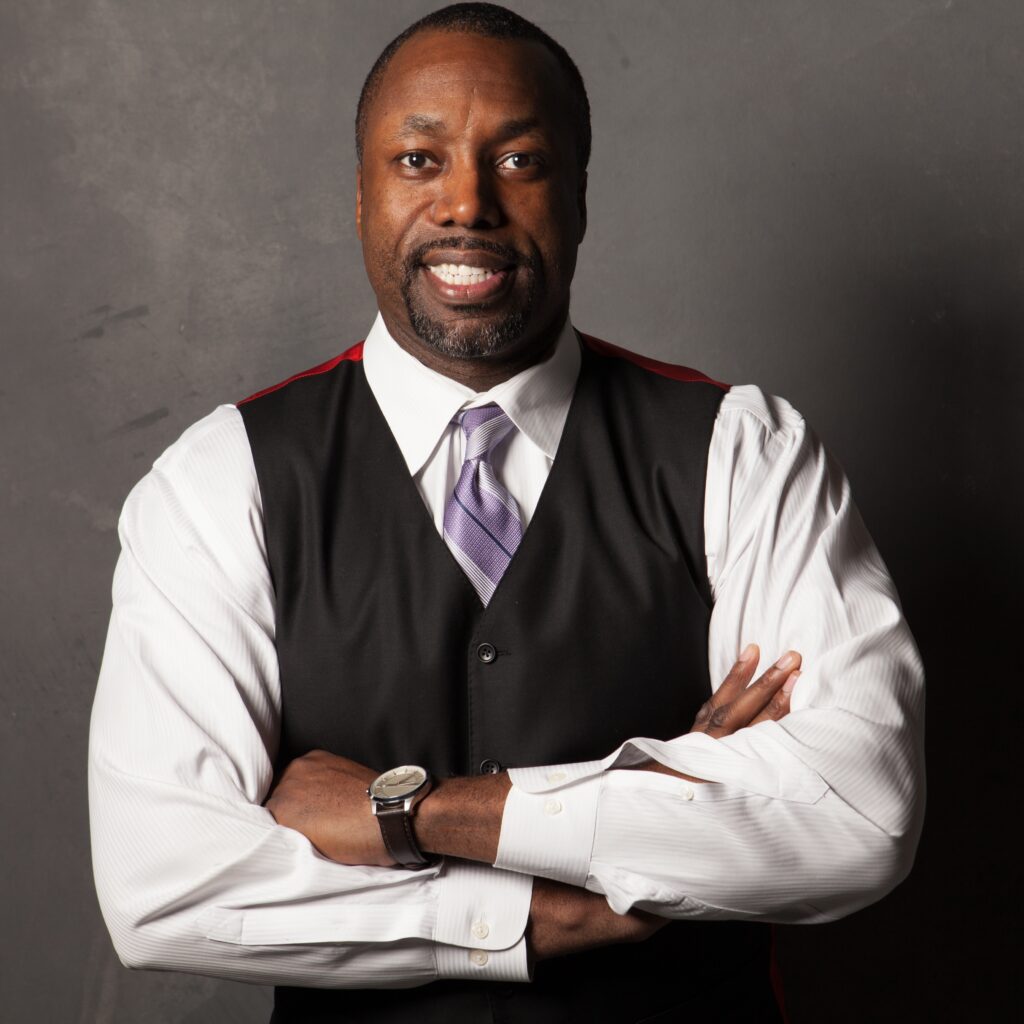 Don’t let your past define you. It’s a saying many of us have heard. Marcus Allen, CEO of Big Brothers Big Sisters, chose a different approach: Embrace your past as motivation to build a brighter future? That’s just what he chose to do.

From a kid living in poverty to a professional basketball player traveling the world to a forward-thinking nonprofit executive, Marcus uses the challenges of his childhood to drive him to better the world around him.

In the six years that Marcus has led Big Brothers Big Sisters (BBBS) Independence Region, he has proved himself to be a visionary leader, a passionate advocate, and a persistent, driving force for change. Marcus has grown BBBS Independence Region to be the largest one-to-one mentoring program in Pennsylvania and the third largest BBBS chapter in the country. He has led the charge to serve more young people each year, increased revenue year-over-year, built influential partnerships with national organizations, and created innovative new programs for kids who are questioning or consider themselves part of the LGBTQ+ community.

Today, BBBS Independence Region provides more than 3,500 children each year with strong and enduring, professionally supported one-to-one mentoring relationships that change their lives for the better. The program delivery model focuses on putting a caring, compassionate adult in the life of a child who is at risk or has some risk of not achieving their full potential. Children (or “Littles”) who participate in the program are 46% less likely to use illegal drugs, 52% less likely to skip school, and better able to get along with their families. And, the positive impacts last well into adulthood.

We spoke to Marcus about how his past inspires his actions and the role of philanthropy and partnerships in addressing some of Philadelphia’s greatest challenges.

You’ve had an interesting professional journey from professional basketball player to corporate executive to nonprofit leader. Tell us about your journey.

I am defined by how I grew up. How I grew up was low-income, single-parent, episodes of homeless and seeing a lot of things that weren’t right for kids, or anyone for that matter. I had opportunities in my life to go to college, play professional basketball, and travel the world. I decided I wanted to do something that gave back. I wanted to be involved in transformational work. And now, because of my work in the nonprofit space, I have been transformed as a person and a professional.

Six years ago, I took on the responsibility of running Big Brothers Big Sisters which is just an amazing organization. Mentoring was one of the factors that allowed me to be successful. I had a mentor at 10 years old who planted a seed in my head and my heart. I wanted to provide that same opportunity for kids who we work with here at Big Brothers Big Sisters.

What motivates you each day and drives you to overcome challenges?

I did an interview recently and the person asked me who my role model was. Of course, I have many people who I look up to. But when I really thought deeply about it, I realized that I am my role model. Every day I live my life thinking about 10-year-old me. I think about how that Marcus saw the world and felt that it wasn’t right for certain people in this country to live the way they lived. Every day I try to impress that 10-year-old kid.

So, to answer your question, that’s what gets me up every day. Each day I wake up feeling like I am going to do something that is going to make a difference for somebody. I get a chance every day to outdo what I did the day before.

Through the Satell Institute you have partnerships with Comcast NBC Foundation and the Alike Foundation. How have those partnerships positively impacted Big Brothers Big Sisters?

Comcast has consistently invested in our Beyond School Walls initiative. The program is designed to give kids an opportunity to visit corporations and learn what is going on at those companies while building a strong and enduring relationship with their Big (mentor). They are paired with an employee and meet with that Big twice a month during their lunch break. Comcast loved the program so much that they wanted to spread it across the country. Over 10 years they have spread it to 17 different locations and pay for that program across the U.S. They have also done some capacity building with us. For us, support from big corporations like Comcast has been essential both in raising money and in giving us access to skills and resources we otherwise wouldn’t have.

The Alike Foundation is a new foundation created by Brad Aronson who believes in the importance of mentoring and the work of BBBS. Brad was previously our board chair and has been phenomenal in making a commitment to the organization. Now with the formation of the Alike Foundation, it’s been awesome that, through the Satell Institute, he chose to support us. Brad is doing what I wish all companies would do. He is making a multi-year commitment with no strings attached – it’s general operating. When people come in and put restrictions on their money – and they are free to do that because it’s their money – it doesn’t help that nonprofit in the way they think it is going to help them.

The Satell Institute is bringing like-minded people together to spread a message that nonprofits frankly need right now. The problems that we are trying to solve are getting bigger and bigger and the resources are getting smaller and smaller. What Ed Satell and the Satell Institute are trying to do is create ambassadors and champions who are of influence and who can get more people off the sidelines to really get involved in helping us to solve these issues.

I think Ed has recognized that we are at a great point in Philadelphia where you have more millennials moving in and you have a lot of cranes going up to build skyscrapers. We have some great stuff happening, but we’re doing it on the backs of a few. We need to broaden our approach. We need to broaden the number of people getting involved so that we don’t burn out the people that are already committed to change. We need to spread some of this love to other people, so we can make it sustainable for everyone.

I recently wrote an article about the five pathways to success for Philadelphia. I think philanthropy is an essential component of the solution to issues like housing instability, poverty, health and so on. I think the Satell Institute is helpful in making a more inclusive and optimistic vision of the future of this region. I think it’s important to really focus on how people feel about Philadelphia. An article came out that Philadelphia ranked 43rd out of 50 metropolitan cities when it came to philanthropy, 46th in terms of volunteerism and 48th in terms of voting. When you factor that in, it says we have an aspiration gap in this city. We must address that, and I think the Satell Institute is an important part of the solution.

What have you learned about building strong partnerships?

The best way to build partnerships, or what I call strategic alliances, is to look for who else is passionate about what you are trying to solve for. Shotgun marriages don’t work. When companies partner on the for-profit side, there is a lot of thinking that goes into that. Nonprofit partnerships deserve a similar rigor. It’s important to determine what the value-add is for each of their missions. When you find that sweet spot, that’s when things work well and 1+1=3.

For example, when I first started, we were serving about 3,500 kids and to me that was a drop in the bucket. Statistics say there are over 150,000 at-risk youth in the region. I wanted to be part of the solution and have a greater impact. There is a national nonprofit called MENTOR and we began to talk and came up with an idea for a partnership. MENTOR promotes, trains and provides technical assistance for entities that do evidence-based mentoring. BBBS is the preeminent one-to-one mentoring organization, so it made sense for us to come together. We could share our secret sauce and they could share that expertise with other nonprofits that they work with. We started that partnership three years ago. Just last year we impacted about 15,000 kids. From 3,500 kids served to impacting 15,000 kids because of that partnership. When partnerships work, they work well. We need to pursue partnerships and alliances that allow us to multiply our impact.

As Corporate Social Responsibility has taken hold, have you seen an impact on your work?

There has been so much change in the 10 years that I have been involved with nonprofits. We’ve seen companies be more proactive around CSR. Some of us in the nonprofit space are really benefiting from this shift, but there is a lot more that can be done. The Satell Institute is a great hub to bring those thought leaders together to talk about who else should be at the table with these companies who are really serious about CSR. These companies can educate others on why this is a strategic pathway for them. They can show them how to do well by doing good.

Marcus Allen will be a featured speaker at the Satell Institute Private CEO Conference on April 10, 2019 where he will expound on many of the ideas discussed in this interview.

The Satell Institute has an online, searchable Think Tank with useful resources and the latest insights on Corporate Social Responsibility (CSR). You will find:

Part of our mission at the Satell Institute is to provide business leaders with the scholarship, information, data, and workable strategies needed to more efficiently accomplish the greater good. The online Think Tank puts these resources right at your fingertips.