Join Us In-Person at the Franklin Institute or via Livestream Madeline Bell is the President and CEO of Children’s Hospital of Philadelphia (CHOP), one of the top-ranked children’s hospitals in the United States. A bold and visionary leader, Bell champions change with empathy and integrity, inspiring the nearly 20,000 employees in the hospital’s $3.2-billion-a-year health system and research institute to create breakthroughs that have worldwide impact.

Bell began her career as a pediatric nurse at CHOP in 1983, later leaving the organization to move into hospital administration. She returned to CHOP in 1995, and has since held a number of leadership positions, advancing from Vice President to Senior Vice President to Executive Vice President to Chief Operating Officer. In 2015, she assumed the title of President and CEO.

Bell has made numerous contributions to CHOP, including the development of one of the largest pediatric ambulatory care networks in the country, the expansion of the hospital’s 4-million-square-foot campus, and the development of many nationally recognized clinical care programs. She has also secured many philanthropic gifts to help further the institution’s mission.

Bell is Chair of the Federal Reserve Bank of Philadelphia’s Board of Directors and serves on the boards of Comcast-NBCUniversal, the Leonard Davis Institute of Health Economics, and Solutions for Patient Safety, and on the executive committee of the Greater Philadelphia Chamber of Commerce. She is a member of The College of Physicians of Philadelphia and of The Economic Club of New York. She is also an adviser to numerous international hospitals and frequently lectures on the topics of children’s healthcare and women in leadership.

Bell is the author of the blog Heels of Success, which offers guidance to women on how to elevate themselves in the workplace, and the host of Breaking Through with Madeline Bell, a podcast that features interviews with CHOP doctors and scientists, as well as philanthropists, innovators, and business and civic leaders. She holds a bachelor of science in Nursing from Villanova University and a master of science in Organizational Dynamics from the University of Pennsylvania. Nicholas Bertram is president of The GIANT Company, an omnichannel grocer known to customers as GIANT, MARTIN’S, GIANT Heirloom Market, GIANT Direct and MARTIN’S Direct that has been proudly serving families across Pennsylvania, Maryland, Virginia, and West Virginia since 1923.

Bertram was appointed to the role in 2017, following years of executive roles at The GIANT Company’s parent company Ahold Delhaize, where he still serves on the US Leadership Team. He began his retail career over 20 years ago at JCPenney, then joining Walmart as a part-time stocker where he spent the next 12 years. He quickly rose in responsibility with leadership roles in store operations, human resources, and innovation. Bertram then went to Jewel-Osco in Chicago as its Senior Vice President of Retail before joining Ahold Delhaize in 2013.

Bertram currently serves as chair for the board of directors of the Pennsylvania Chamber. He is also Co-chair of the Corporate Council and a member of the Foundation Board of Overseers for Children’s Hospital of Philadelphia. Most recently, Bertram was named a 2020 Most Admired CEO by the Philadelphia Business Journal. He attained a BBA in marketing from Eastern Kentucky University and an MBA in global management from the University of Phoenix, along with post-graduate programs at Northwestern’s Kellogg School of Management, Harvard and The Wharton School.

Learn more about The GIANT Company. David J. Adelman is a Philadelphia-based entrepreneur and active private investor. Adelman made his first investment more than thirty years ago, investing just two-thousand dollars in Campus Apartments, a student housing business. Since then, under his leadership, Campus Apartments has become a leader in the industry with more than two-billion dollars in assets under management across 18 states.

Adelman’s strategic vision and business savvy drove Campus Apartments to redefine the college living experience, and today, the company is widely recognized as a leader in the industry and is a go-to-partner for colleges and universities, developers, and investors. Adelman’s strength lies in his ability to structure deals and raise institutional capital from global investors.

Over the past three decades, Adelman has expanded and diversified his portfolio beyond real estate. He is the co-founder and Vice Chairman of FS Investments, a leading manager of alternative investment funds, with twenty-four billion dollars of assets under management. Adelman also serves as the lead investor and Lead Director of Wheels Up, an innovative and intelligent private aviation solution.

In addition to his leadership positions with Campus Apartments, FS Investments and Wheels Up, Adelman also holds positions on the boards of numerous esteemed organizations. His board roles include: Actua Corporation; Penn Medicine Board of Trustees; Board of Councilors of the USC Shoah Foundation; Vice Chair of the University City District Board of Directors; Chairman of the Philadelphia Holocaust Foundation and member of the Young Presidents Organization.

Adelman was the recipient of the 2009 Multifamily Executive, “Executive of the Year” award and was also selected as the 2010 Ernst & Young Entrepreneur of the Year in the real estate category in Greater Philadelphia. He received his BA in Political Science from Ohio State University. A fixture of the Essential leadership team, Christopher Franklin is Chairman and Chief Executive Officer of Essential Utilities, Inc. (NYSE: WTRG). Essential is one of the largest publicly traded water, wastewater, and natural gas providers in the U.S., serving approximately 5 million people across 10 states. He has served as CEO since July 2015, and as chairman since December 2017.

Since being named CEO in 2015, the company’s market capitalization more than doubled, to more than $11 billion. Through the company’s growth-through-acquisition program, customer count nearly doubled and total return to shareholders was more than 100%.

In 2018, the company welcomed its 1 millionth customer, and in 2019, it announced what will be the largest municipal acquisition in the company’s history – an agreement to acquire the wastewater assets of the Delaware County Regional Water Quality Control Authority (DELCORA), adding 165,000 new customers.

These successes are attributed to Franklin refocusing the company on growing its regulated business, purchasing municipal water and wastewater systems, and shedding its under-performing unregulated businesses. The company then broadened its strategy by adding a natural gas platform with the $4.3 billion purchase of Pittsburgh-based Peoples.

The accomplishment of which Franklin is most proud is building a strong management team. He has worked deliberately to bring diversity to the company’s board of directors, employee base and management team. In fact, Franklin has appointed nine women to leadership roles in the company since being named CEO. Under Franklin’s leadership, the company has been recognized by the Forum of Executive Women in Philadelphia for recruiting a Board of Directors that is comprised of at least 30 percent women.

Additionally, Franklin was named one of the Philadelphia Business Journal’s Most Admired CEOs in 2017 for his “strong record of innovation, outstanding financial performance, commitment to quality, a strong vision, a commitment to diversity in the workplace and contributions to the Greater Philadelphia region.” In 2019, Franklin was recognized by EY (formerly Ernst & Young) with their “Entrepreneur of the Year” award for his innovative vision of the Peoples acquisition and many years of successful leadership in the utility industry.

Prior to his role as CEO, Franklin was president and chief operating officer. A 27-plus-year veteran of the company, Franklin has held executive roles in public affairs, customer service and operations.

In addition to serving as the chairman of Essential’s board of directors, Franklin is active in the community and serves on the boards of the National Association of Water Companies, The Chamber of Commerce for Greater Philadelphia, Allegheny Conference on Community Development, University of Pennsylvania Board of Trustees, West Chester University’s Council of Trustees, and The Franklin Institute.

Franklin earned his bachelor’s degree from West Chester University and his MBA from Villanova University. Chris Gheysens, President and CEO, Wawa, Inc.
Chris Gheysens is President and CEO of Wawa, a chain of more than 900 convenience stores located in five Mid-Atlantic States, Florida and Washington, DC. Wawa is a family and associate-owned, privately-held company with more than 36,000 Wawa associates providing convenient and friendly experiences for over 1.6 million customers every day. Wawa ranks 23rd on Forbes’ annual ranking of Largest Privately Held Companies, ranks 33rd in Nation’s Restaurant News’ 200 Largest Restaurant Chain in America and ranks among the top ten Employee Stock Ownership Plans in the country. The company began in the early 1800’s in New Jersey with an iron foundry and a cotton and textile mill, and eventually migrated to Pennsylvania with the opening of a dairy plant in 1902. Wawa’s original dairy was built on land located in a rural section of Pennsylvania called “Wawa” which was named from local Native Americans in honor of their favored game – the Canada goose. As home delivery of dairy declined and supermarkets became more abundant in the early 1960’s, the concept to open Wawa convenience stores became a reality with the first store opening in Folsom, PA on April 16, 1964.

Gheysens is proud to have served Wawa associates for more than twenty-four years, previously holding the position of Chief Financial and Administrative Officer from January 2007 to December 2011, with responsibility for all Financial, Legal and Human Resource functions. As President and CEO since 2013, Gheysens is committed to protecting and fostering the Wawa culture of private ownership and shared ownership, and carrying on the strong tradition of servant leadership. Prior to joining Wawa, Gheysens worked in the audit practice at Deloitte and Touché, LLP in Philadelphia. During his four years with Deloitte, he focused primarily on the retail industry, serving clients such as Reading China and Glass, The Wall Music, Pep Boys, and Wawa.

Gheysens joined the Villanova University Board of Trustees in 2021, previously chairing the Dean’s Advisory Council for the Villanova School of Business. He serves on the WSFS Bank Board of Directors, where he chairs the Audit Committee. In 2017, Gheysens joined The Children’s Hospital of Philadelphia Board of Trustees and in 2020 was appointed as the Chairman of the Board. He also led the formation of their first Corporate Council. 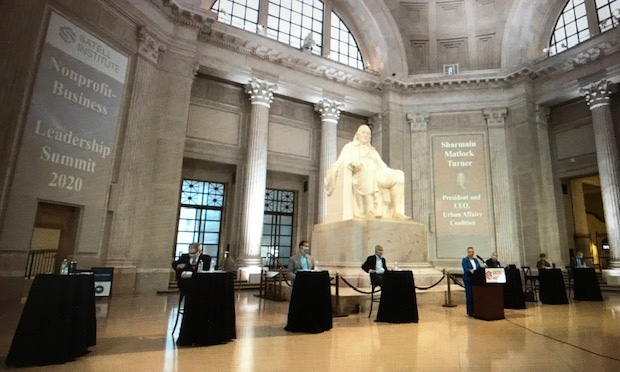 With Special Remarks From: Erika H. James became the dean of the Wharton School on July 1, 2020. Trained as an organizational psychologist, Dean James is a leading expert on crisis leadership, workplace diversity and management strategy.

Prior to her appointment at Wharton, James was the John H. Harland Dean at Emory University’s Goizueta Business School from 2014 to 2020. An award-winning educator, accomplished consultant and researcher, she is the first woman and first person of color to be appointed dean in Wharton’s 139-year history. As such she has paved the way for women in leadership both in education and corporate America. James has been instrumental in developing groundbreaking executive education programs, including the Women’s Leadership program at the University of Virginia’s Darden School.

Known internationally, James was named as one of the “Top 10 Women of Power in Education” by Black Enterprise and as one of the “Power 100” by Ebony. She has been quoted as an expert thought leader by the Wall Street Journal, MSNBC, CNN.com and numerous other media outlets.

In addition to her academic responsibilities, James is a board member of SurveyMonkey, a California-based market research and customer-experience company, the Graduate Management Admissions Council (GMAC) and several organizations that align with her passion for education and advancing women in business. She is also a board member of Save the Children, a nonprofit organization dedicated to improving the lives of children through better education, health care and economic opportunities.

Learn more about The Wharton School at the University of Pennsylvania.