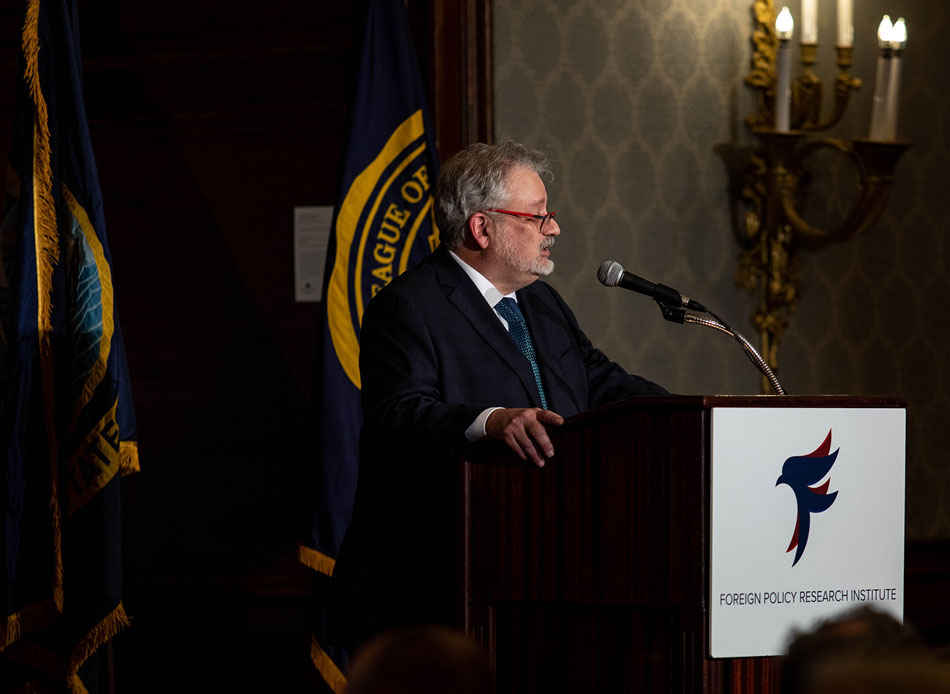 Alan Luxenberg has guided the #1 ranked Think Tank in the world (under $5 million budget) Foreign Policy Research Institute for the past nine years as President.

He has seen it emerge as an outstanding independent, highly respected, centrist leadership resource.

The Philadelphia-based think tank, founded 55 years ago as part of the University of Pennsylvania, later becoming independent, influenced foreign affairs professionals throughout the country and the world through its current, trusted knowledge platform.  FPRI has distinguished itself by impacting present and future government leaders and assisted back-channel efforts that affected U.S.-Soviet relations through the breakup of the U.S.S.R. and improved understanding during crucial times for talks between India and Pakistan, among other spheres.  The Institute’s combination of influential articles/essays, as many as 300 per year, and 50-60 cutting-edge programs in Greater Philadelphia, New York City and Washington, D.C. provide dispassionate and nonpartisan analyses relating to United States national interests.

And Interns who gained valuable experience from FPRI’s programs now fill top-level leadership roles across the political and educational spectrum, something the organization’s departing leader points out with great pride.

Surpassing expectations in an “astonishing” way

“I never could have imagined the network of people Ed (Satell) has brought into The Satell Institute and the CEO Conferences they have had,” Luxenberg said. “It’s really astonishing.” He has also been impressed with the breadth and accomplishments of SI’s own emerging Intern Program.

An early voice at the table

Luxenberg’s vision, strategies and success at FPRI were important to the early development of The Satell Institute in a few key ways.  SI Founder Ed Satell had supported FPRI’s work. As he was thinking about forming an organization to be uniquely focused on Corporate Social Responsibility (CSR), he spoke at length with Luxenberg about the structure of a think tank. “That was his initial vision,” Luxenberg said of Satell. “We spent about 10 hours talking about how we do what we do.”

A mission to influence through facts

FPRI, which receives funding through a four-year commitment of the type encouraged by The Satell Institute, is representative of nonprofits meeting a need that SI seeks to support. The fact that nonprofits often do the work that businesses can’t and won’t do is a key philosophy for SI. With 11 full-time employees, working with 100 affiliated scholars, FPRI is generally considered to be an organization that “punches above its weight.”

SI became something more than a think tank

It was during some of the early conversations with Luxenberg and other regional thought leaders that the idea of having SI become more than a think tank, and adding a “do tank” component, emerged. In addition to Commissioned White Papers from international experts, a Massive Online Open Course that teaches CSR, as well as another under development, and a CSR Resource Library, SI has become a convening force for CEO Members dedicated to CSR through which many millions of dollars have been pledged by their companies and foundations to more than 100 nonprofit affiliates.

As Luxenberg plans to retire to Massachusetts to spend time near family, and looks forward to getting involved with world affairs organizations as a volunteer, he is convinced SI will continue its momentum in the years ahead, noting the greatest beneficiaries of the work of The Satell Institute will be the nonprofit organizations and those they serve that will receive more consistent funding leading to greater mission-oriented successes. “It will really stimulate a level of philanthropy that would not otherwise happen.”

The Satell Institute congratulates Alan Luxenberg on his many achievements and is proud he will remain an SI Board Member Emeritus in his retirement.

The Graham Company
This week The Satell Institute is delighted to welcome The Graham Company and its Vice Chairman and Principal Mike Mitchell. An innovator in its space, The Graham Company redefines insurance brokerage by providing tailored solutions to business — an approach aptly called The Graham Way. The company powerfully extends its relentless company-focused approach with support of the Merakey Foundation, dedicated to providing innovative care and education solutions to individuals and families. This business-nonprofit alliance highlights a parallel focus on comprehensive support of the client and helps to ensure that our societal needs, too, are covered.