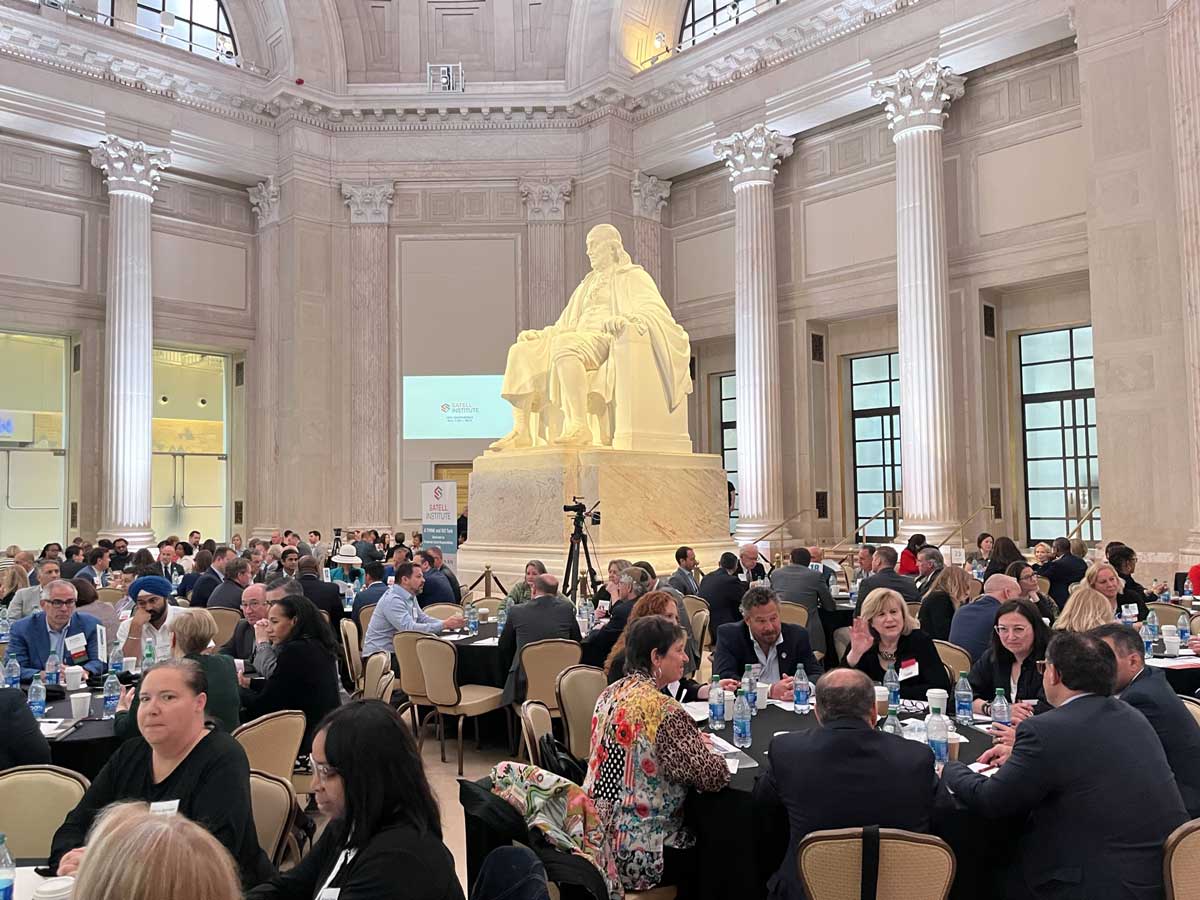 The world has been transformed in many ways over the last two years— from a pandemic and shifting work habits to rising inflation and global instability. The result: the opportunity for companies to transform their communities and their own organizations through corporate social responsibility is greater than ever.

That was the overriding theme at the Satell Institute’s Spring 2022 Private CEO Conference, held on May 12 th at the Franklin Institute. (The event was also livestreamed.) Entitled IMPACT: A New Era in CSR, the conference was attended by 244 CEO members and invited guests, who not only heard presentations from three leading practitioners of CSR, but also spent a lively morning trading ideas about CSR in intimate conversations with their peers. Among the topics covered were the ways companies can improve their communities, the growing impact of CSR and ESG, and the importance of multiyear gifts to nonprofit organizations.

“We make a lot of decisions as CEOs. But when we make decisions with real impact, that benefits our company, our employees, our customers, and especially our community,” Ed Satell, SI’s founder and chairman, said in an inspiring video that opened the conference. “What can be better than that? That’s the CSR impact.”

The Satell Institute plays an increasingly powerful role in deepening that impact. SI’s CEO, Paul Beideman, noted that the organization’s differentiator is the unique platform it provides for high-level networking: between CEOs, between nonprofit  l leaders, and between corporations and nonprofit organizations.

Other speakers left the influential leaders in the audience with insightful, important takeaways about why CSR is more important than ever for communities and companies:

Now is the moment to bring about real transformation.
The conference’s chair, WSFS Bank chairman and CEO Rodger Levenson, noted that in the wake of the pandemic, with inflation, interest rates and global instability all rising, society is at an inflection point. And CEOs are facing a choice.

“You can hunker down and ride out the storm until it’s a little clearer what the future holds,” Levenson said. “Or you can grab this moment as an opportunity to really drive change. And the one thing I would ask everyone here today is: Which path are you going to take? What can you do to really drive change so that 20, 30, 40 years from now people can look back and say, this was a time when we were able to drive significant change?”

CSR is a way to electrify your organization and differentiate your brand.
Tim McDermott, president of the Philadelphia Union, energized the audience by showing how community has become central to the mission and identity of the soccer franchise, whose entire existence is due to a passionate group of local fans called the Sons of Ben.

“We are by, of and for the community,” McDermott said, explaining how that notion infiltrates all parts of the organization, from its volunteer and philanthropic activities to—even more importantly—its business operations and brand presence in a competitive sports market that includes the Philadelphia Eagles, Philadelphia Phillies and Philadelphia Flyers. “We need to differentiate ourselves, and we do that around CSR and around community,” McDermott said. Other companies can seize the same opportunity.

You can embrace ESG—and still earn record profits.
In talking about Bank of America’s deep commitment to ESG (environmental, social, governance) standards, Jim Dever, president of BofA’s Philadelphia region, emphasized that companies don’t need to choose between supporting the community and achieving strong financial results. They can do both. “You can deliver for shareholders and stakeholders,” said Dever, who noted that Bank of America has reported record profits while simultaneously reducing its carbon footprint to zero, raising its minimum wage for employees to $20 an hour, and building board and management teams that are 50 percent diverse. “You can do good and do well.”

For real impact, multiyear giving is essential.
In a powerful presentation, WSFS Bank’s Vernita Dorsey made the case that multiyear gifts to nonprofits are absolutely essential when it comes to impact. (The Satell Institute requires members to make a four-year commitment to the nonprofit partner of the member’s choice.) A multiyear gift not only provides stability and allows nonprofit organizations to build their capacity, but it also creates a far stronger relationship between giver and receiver—one that ultimately benefits both. “The community recognizes it, customers appreciate it, and associates want to be part of a company that provides it,” Dorsey said of CSR.

Don’t think outside the box. Think inside the circle.
The peer idea exchange portion of the morning finished with a report-out by many of the groups, who shared what they discussed. One key theme was the power of collaboration and coordination. “We don’t need to think outside the box, we need to think inside the circle,” said Vertex CEO David DeStefano, who led a conversation about education. (The conference featured 13 “affinity tables” organized around six specific CSR impact areas.) Real change happens, DeStefano noted, when there’s cooperation and alignment among all organizations.

The Satell Institute is the leading CEO member organization dedicated to corporate social responsibility. Nonpartisan and nonprofit, it’s fully funded by an endowment, allowing it to charge no dues or fees to members. Since SI’s founding, members have contributed many tens of millions of dollars to nonprofit organizations. Launched in Philadelphia, the Satell Institute is quickly expanding to other markets, including Pittsburgh and New York.